Bank Partners with Hosanna Industries on “A Miracle”

If you ask the Houle family, they’ll call it a miracle. On Sunday, March 20, where the trailer they called home once stood, was an empty lot. On Thursday, March 22, they moved into a brand new home on that exact spot.

The “blitz build” by Hosanna Industries was a sight (and a site) to behold. The Bank’s involvement was critical to the project’s success.

On Tuesday, March 22, volunteers from the Bank worked on the house build. Helping hang gutters, mix “mud”, stain woodwork, and more… It was a whirlwind of activity that the Bank team said was fun to be a part of, but also very hard work.

Beyond lending a hand, the Bank played an integral role in the project by providing financing to the project. Without it, the project may not have happened… or at least been postponed. For more information about Hosanna Industries, click here. To read more about the house build, read this article in the Grove City Allied News.

Photos show: the finished home at the dedication, Jim Dionise with the Houle Family in their new kitchen, the Mars volunteers. 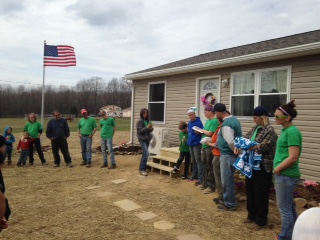 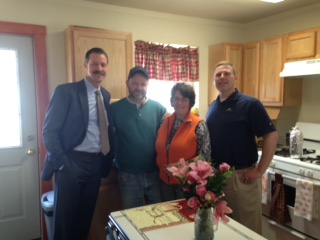 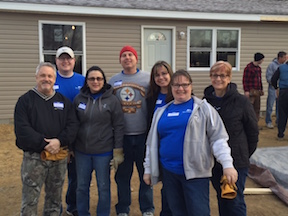 From time to time, we provide links to other websites for the use of our visitors, which have been compiled from internal and external sources. By clicking “Continue” below, you will be opening a new browser window and leaving our website. Although we have reviewed the website prior to creating the link, we are not responsible for the content of the sites.

Information on linked website pages may become dated or change without notice, and we do not represent or warrant that information contained on these linked pages are complete or accurate. We suggest that you always verify information obtained from linked websites before you act upon such information.

The privacy policy of this bank does not apply to the website you visit. We suggest that you always verify information obtained from linked websites before you act upon such information.